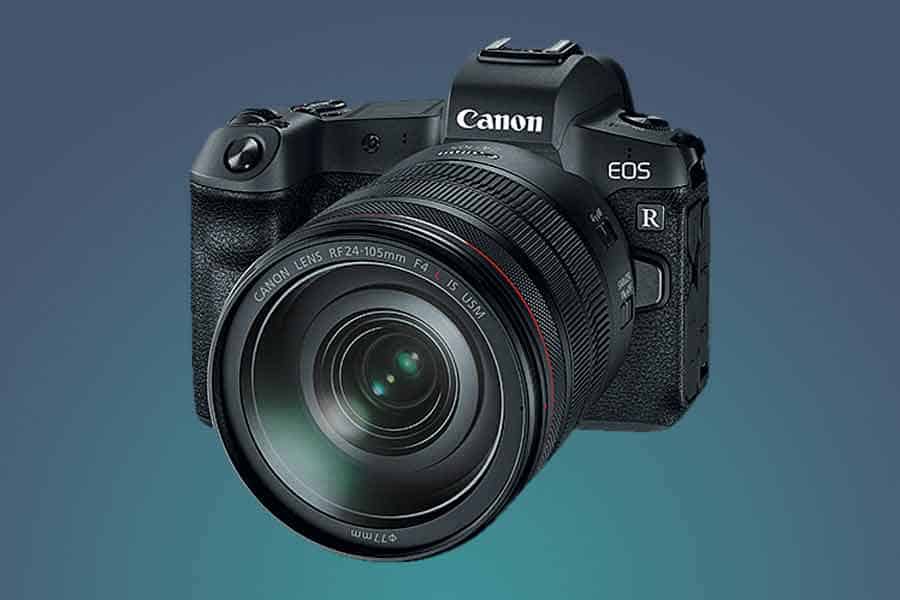 I always like to make sure my EOS R’s battery is fully charged before going out on a video shoot. However, since I produce website videos and TV commercials for a living, I know I’ll probably need at least two batteries in my kit bag. So how do I charge my EOS R batteries?

However, the method you can use depends on the type of battery you are using in your Canon EOS R. Let’s first take a look at the two batteries you can use with this Canon camera.

What battery does the Canon EOS R use?

There are two types of battery that will fit and work with the EOS R. These are the Canon LP-E6N and LP-E6. Both are rechargeable Lithium-ion batteries. They look similar. In fact, on the outside, they are shaped identically. The only way you’ll tell the difference is by looking at the flat rear side of the battery and checking what it says on the label or by popping the battery into the camera, opening the menu, and checking the Battery Info.

Both the LP-E6N and LP-E6 are lithium-ion camera batteries and externally they look the same. Each delivers a voltage of 7.2 volts, however, the LP-E6N has a slightly higher capacity of 1865mAh / 14Wh. The LP-E6 battery has a capacity of 1800mAh / 13Wh. So, the LP-E6N should last a little longer.

The LP-E6 has now been discontinued and replaced by the LP-E6N. However, many LP-E6 batteries remain in photographers/videographer’s kit bags.

Although the LP-E6N can be used in any Canon DSLR originally designed to work with the LP-E6, it’s only the LP-E6N that can be charged in-camera or in a battery grip.

How do I charge my EOS R LP-E6N battery pack?

Unless you have taken the battery pack out of the camera, remove the orange-colored plastic protective back plate from the battery.

Connect the power cord into the charger and insert the plug into the power outlet.

Charging will automatically start, and the orange light will blink during charging.

Once fully charged the orange light will go out and change to green.

Can I charge my Canon EOS R camera battery without a charger?

Yes, you can charge the EOS R battery without an AC adapter. However, it must be an LP-E6N battery rather than an LP-E6 battery pack.

The battery that came with your camera can be charged while it is in the camera or in a battery grip.

This can be done in one of two ways by using the USB C connector on the camera or battery grip.

Method One to use the Canon PD-E1 USB Power Adapter.

The PD-E1 USB Power Adapter is dedicated to select Canon EOS R mirrorless cameras and PowerShot G cameras, allowing the battery to charge while it is inside the camera. As well as working with the EOS R the adapter can also be used to charge through the USB port of the EOS RP, PowerShot G5 X Mark II, and PowerShot G7 X Mark III.

for more details and buying options.

Method Two also involves Canon camera battery charging through the USB C connector on the camera. But instead of using the PD-E1 USB Power adapter you can use the USB C cable that came with the camera and a Power Bank.

One point you should be aware of is that not all power banks will charge the LP-E6N battery in your camera. The power bank must provide Power Delivery, sometimes indicated just as PD. Hence the name of Canon’s USB Power Adapter, the PD-E1.

A suitable power bank is the Anker PowerCore Essential 20000 PD USB C Portable Charger. It is a high-capacity 20,000mAh Power Delivery power bank. That’s more than ten times the capacity of a single LP-E6N battery, making internal battery charging a great solution if you intend to travel with your EOS R in regions where you may not have access to mains power outlets.

and can also be used to charge a range of other devices.

Since you might have further questions about the LP-E6N battery, the Canon EOS R‘s power source, I’ve collected some additional questions and answers.

What is the Canon EOS R battery charge time?

When using the standard mains outlet AC Canon charger that ships with the EOS R, according to the manual the charge time is about 2 hrs 30min when the battery is fully exhausted.

However, Canon Canada says it takes about 2hr 5min to fully charge.

Many people will advise you to fully charge your batteries before first use. However, this type of thinking is based on the experience of using NiCd battery technology. These older batteries had to be fully discharged and fully charged but this is unnecessary with modern Lithium-Ion batteries. You can use the battery as it is when you receive your EOS R.

However, there’s nothing to stop you from charging the battery before first use. When you buy your camera, the included battery will not be fully charged since Lithium-Ion batteries do gradually lose their charge during storage.

If you find that the battery is at or near full capacity the charger will automatically stop, and the charging lamp will go from blinking orange to solid green.

How long does a Canon LP E6N battery last

The rate at which you use up your “battery juice” depends on how you shoot and what you shoot. Of course, the ambient temperature also plays a part.

When recording movies continuously, Canon claims the LP-E6N battery will become exhausted after approximately 1hr 40min, or a little less in colder conditions. However, that figure for the canon eos r battery life seems a little misleading to me.

When I’m out on a video shoot I seldom film continuously, although sometimes it does happen. In my commercial videography world, I shoot many short clips of b-roll footage and some longer piece-to-camera video clips. Under these real-world conditions, a single battery will last me two-thirds to three-quarters of the day. So, for most of my commercial video shoots, I never need more than two LP-E6N batteries.

The number of photos that the EOS R can take on a single battery pack also varies, depending on your shooting style. According to the Camera & Imaging Products Association (CIPA) guidelines the Canon R can take 370 images on a single charge. But many users report wildly different results.

For instance, on Reddit Moenke said, “did ~1000 photos before the battery died for me after 4-5 hours.” While Bryan Carnathan of The Digital Picture reported between 670 and 1510 shots on a single fully charged battery.

So real-world and the CIPA rating somewhat far apart.

How do I check the battery level on my Canon EOS R camera?

To check the remaining battery power on the camera’s LP-E6N battery turn on the camera and press the menu button.

Select page 3 of the wrench menu and you will see Battery info on the fourth line. Tap on Battery info. and you will the remaining battery capacity as a percentage as well as the shutter count and the recharge performance.

How can I tell if my Canon battery is genuine?

Check the packing that the battery pack comes in. The outer transparent plastic packaging and the cardboard backing should be glued together and not simply slide apart.

Also check the unique hologram on the packaging. It should show the word ‘Canon’ running in horizontal bands. In Between these bands you will also see a helix that is overprinted with the word ‘Genuine.’

As a further check, when tilted from a front-on to a horizontal position, the hologram’s colour changes from gold to a greenish tint. If you do not see this change in color, the hologram is a fake.

Do all Canon cameras use the same battery?

Canon’s EOS digital camera range uses four types of battery. Most of the batteries in the EOS DSLR range are Lithium-Ion (Li-ion) but not all. The NP range uses Nickel Metal Hydride (NiMH) technology. These are large, high-capacity batteries for professional cameras. The LP series, of which the LP-E6N is part, uses Li-ion technology that allows the manufacture of a lighter and higher capacity battery than the NP range.

Canon also makes the BP and NB battery ranges. The BP battery is used in consumer and semi-professional cameras. For example, the Canon XF100 camcorder uses the BP-945 and BP-970 batteries, both use Li-ion technology. The NB battery range is a smaller Li-ion battery that is used in Canon’s lightweight consumer cameras.

link to 10 Ways to Improve Transcription Accuracy in Premiere Pro

is to provide Premiere Pro with the clearest dialogue possible so that it won’t be distracted by non-dialogue sounds. It’s the old story, if you input rubbish, you’ll get rubbish out.

The American Press Institute reported around 85% of the video content on Facebook is watched muted. While LinkedIn says about 80% of videos on its platform are watched without sound, and 70% of...