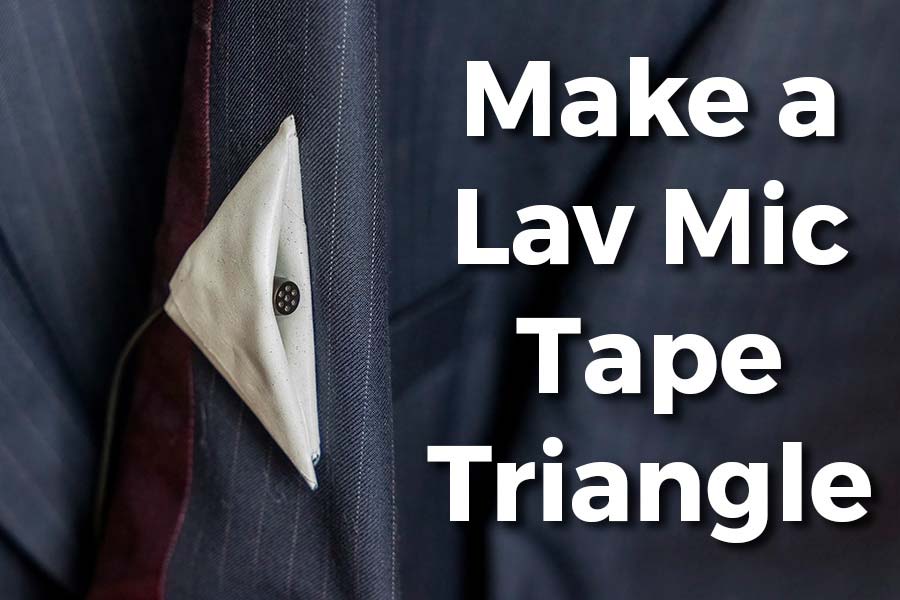 Most lavalier or lapel microphones are supplied with a tie clip holder. It has a sprung alligator jaw that holds it securely in place on clothing, and the front has a round holder for the microphone. Unfortunately, these types of tie clip lav mic holders aren’t particularly good if you want to mount the microphone under clothing, and eliminating the rustle of clothing when using these mounts can be awkward.

This is where the Lav Mic Tape Triangle can become your best friend.

To attach a lav mic to clothing, put the mic between two lav mic tape triangles (sticky side out), then stick the triangle to the clothing. This prevents the mic from picking up the sound of the mic rubbing against clothing and helps stop sweat from reaching the mic. To attach the mic to the skin, use medical tape.

What Lavalier Tape do You Use for a Lav Mic?

Traditionally, lav mic tape triangles were made using 2-inch wide gaff tape. In all likelihood, this is because this type of tape was readily at hand in TV studios and often in the kit bags of freelance videographers.

In the past, these gaff tape triangles were used not only on clothing but also to attach lav mics to the skin, usually in the chest area. However, legislation now requires adhesives intended for use on the skin to be hypoallergenic.

How to make hypoallergenic Lav Mic tape triangles use microporous or micropore medical tape, which is available in 1, 2, and 3-inch widths. Although I have used 1-inch medical tape (known as surgical tape in the UK), the 2-inch-wide tapes work much better when making these sticky triangle pillows. You can use 3-inch tape, but it isn’t necessary to go that wide. As an alternative to medical tape, you could use moleskin adhesive tape. Note that if you are in a hurry and the lavalier needs to be taped to the skin, you could dispense with lav mic triangles and use medical tape to tape the microphone onto the skin, in the same way, you would use normal scotch tape.

Note that the color of the tape you use does not matter since it is the adhesive side that you will be on the outside of the triangular pillows.

In summary, the tape to use for lav mic tape triangles includes: 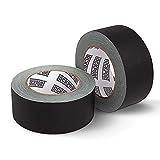 How to Make a Lavalier Microphone Gaff Tape Triangle

Here I will be using gaff tape to make the lav mic tape triangles. If you are concerned about the possibility of being allergic to the adhesive used on gaff tape you could wear protective vinyl or nitrile gloves. Better still, use medical tape or moleskin tape.

The lav mic tape triangle is a DIY solution to mounting lavalier microphones beneath clothing. It’s easily made and can securely keep the microphone in place because both outside faces of the triangles stick to the outer and inner layers of clothing. Use the following steps to make the tape triangles.

Cut or tear a 6-inch (15cm) length of gaff tape and fold over one end to make a triangle. Make sure the upper side of the triangle is the sticky side.

Keep folding over the triangle along the length of the tape.

You should end up with a triangular pillow where all surfaces are from the adhesive side of the gaff tape, and therefore sticky.

Set the tape pillow aside on something, like a glazed plate, that will later cleanly release the sticky triangle. To make the release easy, keep the amount of surface contact to a minimum. Now repeat steps 1 to 3 to make a second triangular pillow.

Lay the second sticky pillow over the lavalier microphone to encapsulate the mic.

You now have a lavalier microphone and lav mic tape triangle sandwich that can be stuck on the reverse side of clothing and then pressed down onto the lower layer of clothing. For example, you could put the microphone triangle between a tie and shirt, under the lapel of a jacket, between an outer jacket and T-shirt, and any other combination you need.

Those two sticky triangular pillows will keep the microphone in place and cushion it if the person wearing the microphone moves around. This stops the mic capsule from rubbing against clothing, the sound of which would otherwise be picked up and cause noise on the recording.

You might also like my article How to Wear and Use a Lav Mic. It shows how to use the gaff tape triangles to wear a lavalier microphone.

Do the Sticky Pillows Have to be Triangular?

Folding over the tape to make sticky triangles can be tricky to begin with, so can you just make a square pillow instead?

In theory, you could fold over the tape into a square, but the two sides are not joined, and the square will open into a tube shape. The point of making a triangle is to keep the opposing side together. This gives holds the sides of the triangle together, giving some rigidity, and creating a cushioning airgap.

To create a square tape pillow, you would need two lengths of tape. Create a sticky square and then wind the second length of tape at 90 degrees to the first. Although possible, I find it more time-consuming and fiddlier.