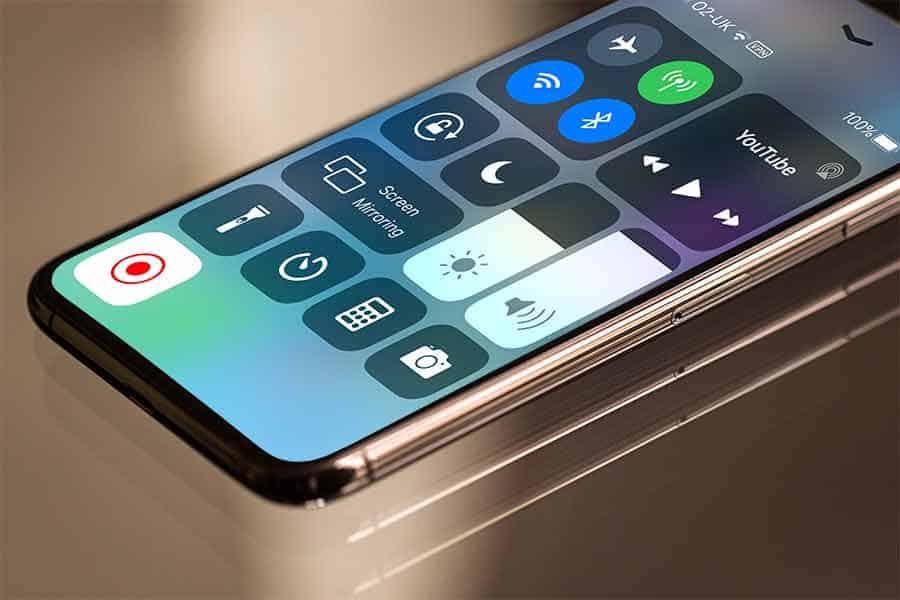 You probably already know you can take a screenshot of your iPhone’s display. I’ve done it many times to capture images to help explain aspects of making videos on an iPhone. But since iOS 11 you can go one better. Your iOS device can create a screen recording video of your display. In this article, I will explain how to record your screen on an iPhone.

How to record your iPhone screen.

Once the recording has stopped, you’ll find your screen recording video in the Photo app. So let’s go a bit more in-depth with images. I’ll show you how to film or record your screen on an iPhone with iOS Screen Recording.

This video from Apple will take you through the process of recording your screen, so you might like to take a moment to watch it. However, feel free to skip ahead for a more detailed guide.

To record and broadcast what’s being shown on your iPhone or iPad screen this is what to do.

You will need to have the Screen Recording control available in your devices Control Center.

Step 1 – Check whether Screen Recording is in Control Center

To check whether it’s there, open Control Center. On an older iPhone swipe up from the bottom edge of the screen. On an iPhone X and later, or an iPad with iOS 12 or later, or iPadOS, swipe down from the screen’s top-right corner.

The Screen recording icon is a filled circle surrounded by a circle line. If you don’t see it in Control Center

On the next screen, tap Customize Controls. Scroll down and tap the add (“+”) icon to the left of Screen Recording.

Swipe up from the bottom of the screen (or down from the top right) to open Control Center. You’ll see the Screen Recording control is present.

When you come out of the Control Center you will see one of two indicators that you are recording your iPhone’s screen. On older phones, the status bar will turn red and initially display “Recording”, before changing back to showing the normal display, although on a red bar. Newer phones will display a red oval showing the recording timer in the top left corner of the screen.

These may disappear when you’re using some apps, however, your screen will still be recorded. If you want to check that you are recording open the Control Center and you should see the red pulsing record control.

There are two ways you can end a recording.

Method 2: Open the Control Center and either tap the pulsing red Screen Recording control in Option 1 above or tap “Stop Recording” in Option 2 above.

I’ve prepared a table of devices that are compatible with iOS 11. If you have a device that is newer than those listed, you will be able to access Screen Recording.

Will Screen Recording record everything on my iPhone’s screen?

Will it record everything?

Pretty much unless you are using an app with digital rights protection.

You probably can screen capture YouTube videos but that doesn’t mean you should. For a start, capturing YouTube streams is against their terms of service. So, it’s against YouTube’s rules to download or record videos from the platform.

However, there are several legitimate reasons to record your screen, for instance, creating reviews and walk-through tutorials. However, be aware that Screen Recording will record almost everything, that includes notifications. So, before you start recording activate Do No Disturb to prevent phone calls and notifications from popping up during the recording.

If you’re unsure how to activate the “do not disturb” mode tap Settings, then choose Do Not Disturb. In the next window tap the button next to Do Not Disturb, then in the Silence section tap Always.

Although some apps won’t allow you to record audio, in most cases you will get the app sound being recorded.

But what if you want the screen recording to include your voiceover instead of the normal app audio? No problem, you can do that. Here’s how.

Swipe to open the Control Center then tap and hold the screen record button until a mini menu opens. Below the mini menu tap on the circular microphone icon to turn on the iPhone’s microphone. The circular icon will turn red, and your microphone audio will be recorded instead of the app sound.

You can record or broadcast your screen

Remember the mini menu that opened when you tapped and held the screen record button?

Although iOS Screen Recording is quick, easy, and free, you might want another way to record your screen. For instance, the red recording bar at the top of the screen (on older iOS devices) or the red timer (on newer iOS devices) will be baked into the recording.

You could of course crop the recording so that viewers won’t be able to see the red bar or timer, but that’s a workaround rather than a proper solution.

This is where screen mirroring can be useful.

My favorite screen mirroring software for the iPhone is Reflector 3 from Air Squirrels. It allows you to wirelessly display your iPhone on your Mac or Windows PC.

After installation on your desktop, you can try out the app FREE for 7 days. If you’ve already bought a license but need to download the software again, run the software and enter your license key when prompted.

Is there a limit to iPhone screen recording?

Although there is no limit to the length of your screen recording, the available space on your iPhone will determine how long you can record. It is a good idea to free up space before you start recording on your iPhone.

Is it illegal to screen record movies?

Since it is against the terms of service to illicitly download or copy a movie from services such as YouTube or Netflix it would be illegal to screen record and store a movie. The streaming apps may also block your attempt to copy material. To copy the movie legally you would need permission and a license.

Why do I not have screen record on my iPhone?