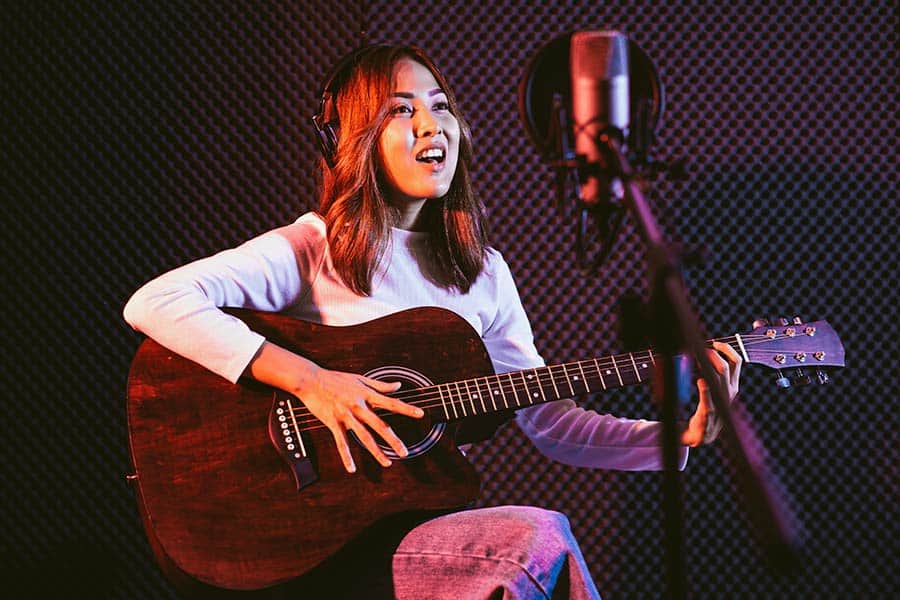 If you have ever recorded some speech or a vocal, you will know the perils of saying certain words when you are close to a microphone. It is all too easy for recordings of those words to start with what sounds like a loud thump. That thumping sound is what is known as a voice or vocal pop.

What causes a pop when recording your voice

What is common to all these words is that they require the sudden release of breath, often referred to as a plosive. These high-energy words involve two things exiting the speaker’s mouth, a sound wave, and a burst of air.

Normally, the microphone’s diaphragm will move back and fore at the frequency of the passing sound wave. This movement causes a varying electric current in the microphone that can be recorded and reproduced later.

The sound wave, or pressure wave, doesn’t cause much movement of the air particles. In fact, you can think of them vibrating back and fore a tiny amount around the same spot while passing their movement to a neighboring air particle to propagate the sound through the air.

Since the microphone’s diaphragm matches that movement, it also moves back and fore a tiny distance. The problem, or the pop, arises when the fast-moving air from those Ps and Bs strikes the diaphragm. This causes the diaphragm to be distorted far beyond its normal range of positions. The resulting electric current spikes massively, resulting in a sound that is reminiscent of a thump, which we call a pop.

So, the pop is literally a sound created when the sensitive part of the microphone is hit by a blast of fast-moving air.

What is it that a Pop Filter filters out

Pop filters do not filter out pops. This is because the pop is an electrical artifact created within the microphone when the microphone’s diaphragm is struck by a blast of fast-moving mass of air. More accurately, a pop filter removes the blast of air that, if it reached the mic, would cause a pop.

But whichever type of pop filter you use, success in dealing with pops relies on stopping that small blast of air from reaching the microphone.

Do plosives really cause a blast of air?

It is easy to demonstrate that words starting with a consonant like a letter P, create a blast of air to leave your mouth.

Place the palm of your hand about 4 to 6-inches in front of your mouth and recite the rhyme of Peter Piper. Each time you say a word beginning with P you will feel a blast of air on your palm.

If you want a more dramatic example of how that blast can affect other objects, light a candle, place it 4-6-inches in front of your mouth, and recite Peter Piper again. The candle flame will be deflected and probably be blown out on the first or second words.