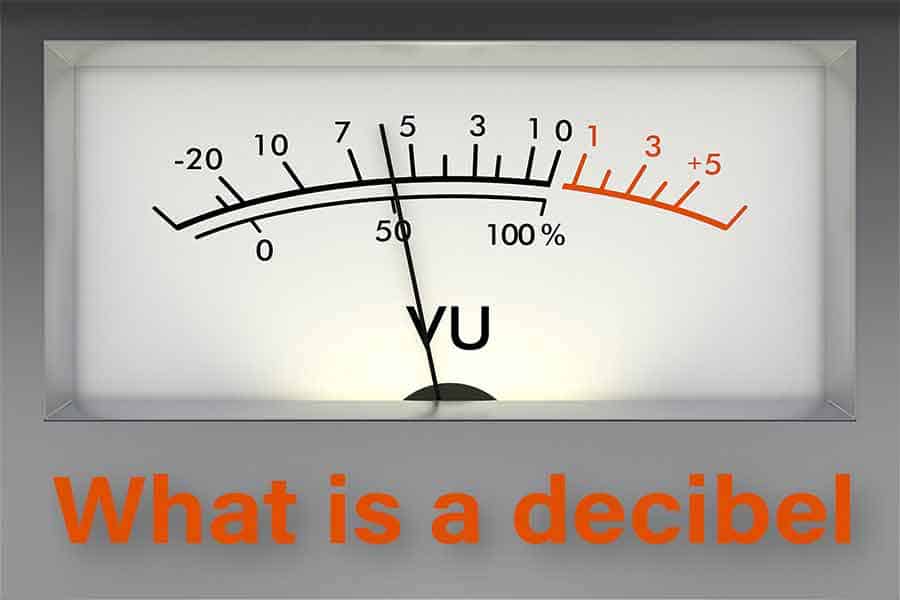 What is a decibel or dB in audio recording?

A decibel is a unit used to express the level of a sound compared to a reference level, using a logarithmic scale. The decibel value is proportional to the logarithm of the ratio of the sound property and a reference property, or log(P/Pref).

One measure that we can take of a sound’s loudness is its Sound Pressure Level or SPL, which is measured in Pascals. If you look at the specification sheet of a microphone it may include the maximum SPL of the microphone.

A 10dB increase is approximately a factor of 2 increase in the perceived loudness. To calculate the factor change for any decibel change, see the calculator on the sengpielaudio website

The quietest sound the human ear can perceive is about 20 µPa (0.000002 Pascals). The loudest sound is about 20 Pascals. That is a difference of about 10 million. So, using a linear scale in Pascals for loudness would be impractical. Instead, we use a non-linear logarithmic scale that represents the ratio of two sound pressure levels. Specifically, the ratio of our sound level and a reference level.

The exact decibel formula does not matter here. You just need to understand that we take the logarithm of the ratio P/Pref where P is the level of our sound and Pref is our reference level. The unit of that logarithmic scale is the decibel or dB.

But the decibel is not an absolute nor specifically a unit of loudness. It is just a logarithmic ratio based on a reference level. In fact, when it comes to sound, the decibel can refer to sound pressure levels, a voltage, or power. The important part is what we choose as our reference. In the case of sound, we normally take the threshold of human hearing as our reference point.

Quick definition: The decibel is the logarithm of a ratio referenced to a property

Whether a sound is quoted as having a decibel value that is positive or negative, depends on how the reference level is set and on the way logarithms work.

Why sounds have positive decibel values

Remember we are dealing with the logarithm of a ratio, and the reference level is the denominator of the ratio, or the bottom number. The level we are measuring is the numerator, or the top number of the ratio. Say our reference is the threshold of hearing, which is about 20 µPa. Then what would be the decibel value of that near silence? At the threshold of hearing the Sound Pressure Level is 20 µPa. That would be the number on the top of the ratio

However, our reference level, the bottom number in the ratio, is also 20 µPa. Therefore, the ratio equals 1. If we take the logarithm of 1 the answer is zero. So, the threshold of hearing 0dB. All sounds that are louder than the quietest we can hear will have a higher sound pressure level than our reference and so the ratio will be greater than 1. Now the logarithm of any number that is greater than 1 will always be a positive number.

So with the threshold of human hearing as our reference point, all sounds will have a positive decibel or dB value. For example, a pin drop or breathing may be about +10dB, a normal conversation around +60dB, a hairdryer about 90dB, a jet aircraft taking-off about +130dB and the threshold of pain about +140dB.

How we do get negative decibels

But how do we get negative meter values on our DAW? Simply put, in the digital world, we have a limited number of discrete values we can assign to the amplitude of a sound wave. The number of discrete values will be determined by the bit-depth of the recording. Say we are recording 16-bit audio. The maximum value we can have for the amplitude of the sound will be 2 raised to the power of 16, or 65,536. However, on the so-called two’s complement representation (a waveform with values above and below a central zero line) the maximum value would be about half of that figure. The maximum is +32767 and the minimum is -32768.

How does that maximum relate to your meter?

In a 16-bit digital system, the maximum sample value of the meter at Full Scale is 32767. That value is fixed and cannot be anything else. We cannot record any sounds that are louder, without clipping the audio and the introduction of digital distortion. We, therefore, have a handy reference point from which to calculate the ratio of our sound levels.

So back to the ratio of levels. With our reference being the maximum value in the system, which means our reference will always be the largest of the ratio’s two numbers. Because the reference level is the denominator of the ratio, that ratio will always be a fraction. The significance of that is that the logarithm of a fraction is always negative. So, the meter on a DAW will show the loudest recordable sound, without clipping, as 0bB. All quieter sounds, relative to the reference point, will now have negative decibel values.

The decibel comes in many flavors

If positive and negative decibels are not confusing enough, they come in an assortment of “flavors”. Earlier I said that the decibel (dB) is a way of expressing the ratio of two values of a property using a logarithmic scale. The important part in that sentence, just here, is the word “property”. The property could be a sound pressure level (SPL), voltage, power, energy, field strength, bandwidth, or various other things.

What does dBA stand for in sound?

We also have a variety of decibels for sound loudness; dB(A), dB(B), and dB(C). These take account of the fact that, even when we have equal sound pressure levels, the frequency response of the human ear is not the same throughout our hearing range. The response of the human ear is higher between about 1kHz to 4kHz than at lower or higher frequencies.  To compensate for this A, B or C filters can be added to sound meters. This allows them to “hear” sound in a way that is closer to the way humans perceive loudness.

In digital audio, the property we use as our reference is the maximum signal we can represent as a binary number. This is our Full-Scale value and we would normally write the decibel symbol as dBFS, where FS means, relative to Full Scale. dBFS is the decibel used in your DAW, digital audio recorder, or camera. However, the meter on these devices is frequently only marked as dB.

Are you confused? I really don’t blame you if you are. What you need to understand is that the decibel is not a unit like mass or length. The decibel is the logarithm of a ratio referenced to a property.

Can we hear silence?

What is silence? If it is the total absence of sound, then under what conditions might that occur? Since sound is usually a pressure wave moving through the air then silence would be when no pressure waves strike the eardrum. For that to happen, everything around us would have to be motionless. The only conditions under which that would be true would be at a temperature of absolute zero when even the motion of atoms stops. Since you would be long dead before you and the universe reaches that temperature, you will never be able to experience total silence.

How about “the silence of space”

You could argue that there is silence in space because it is a vacuum. Since there is no air for sound to propagate through, there can be no sound. Therefore, you would think that space must be silent. Unfortunately, you would not last long in the vacuum of space to experience anything, let alone silence.

So, if we cannot experience total silence, could we experience near silence? To do that we would need to enter an extremely well-insulated room, where even sounds from within are absorbed. Such places exist and are called anechoic chambers.

According to the Guinness World Records

, the quietest place on earth is an anechoic chamber at the anechoic chamber at Microsoft Headquarters, Redmond, Washington, USA. The lab has insulated the room from the outside world, with the acoustic treatment absorbing almost all the sound, and to our ears the room is silent. Ultra-sensitive tests on 10 June 2015 showed that the average background noise was -20.35 dBA (decibels A-weighted), making it officially the quietest place in the world.

The quietness of the room is slightly academic. In such a quiet environment you will become aware of your own breathing and even your heartbeat. Ultimately you will never hear silence because of your own self-noise.