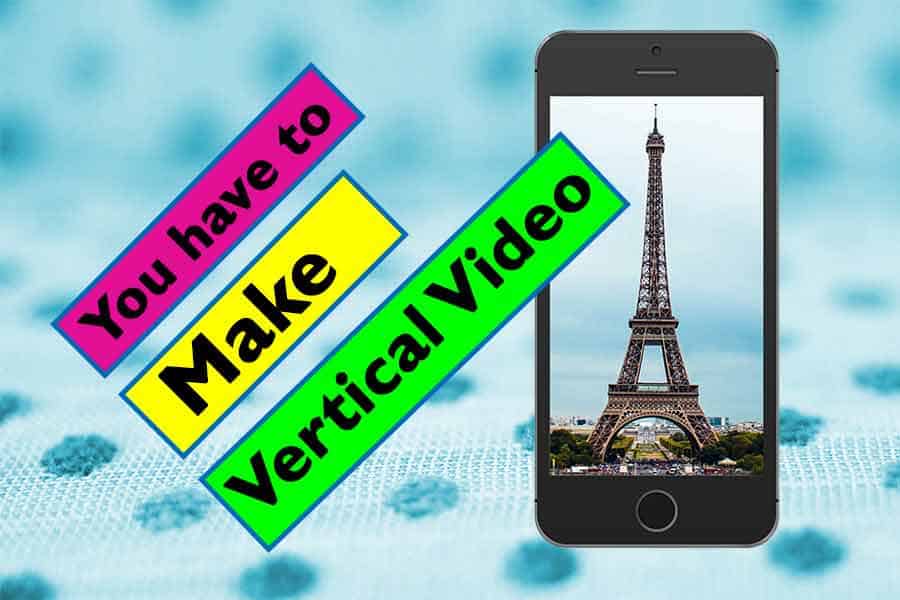 If you listen to YouTube vloggers, bloggers, and online comments you would think that it is never right to make a Vertical Video, also known as Portrait Mode Video. Most people seem to hate vertical video. Here are just a few comments from a vertical video posted by YouTube’s Creator Insider.

From those comments, you would think that vertical video is the mark of bad or poor-quality video.

In that respect, I would disagree.

Sure, you can get badly made vertical video, just like you can get poorly executed landscape video. But that is a question of poor video production skills rather than a poor format.

There are some subjects that lend themselves to vertical video, irrespective of the fact that human sight is designed for wide vision. I’ll return to that later, but first I want to explain the main reason there is a place for vertical video.

The world has gone mobile

If so, much media consumption is carried out on mobile, you must ask, how is it watched on mobile? The answer is pretty much down to the way we comfortably hold our smartphones.

You only need to look at how people around you access social media platforms to realize mobile is king.

Look at people commuting, in the office, or at play. They will be holding their cellphones vertically and consuming content vertically. Vertical is the default orientation for social media today.

It’s the way we hold our mobiles

Your cellphone sits in your hand in vertically. Not only does that grip seem natural and comfortable, but it also allows the straightforward operation of the phone with your thumb.

Now try turning the mobile so it’s horizontal. It feels awkward and if you stay in that position for any length of time your wrist and forearm hurt. Looking at the screen, say to watch a landscape video, is a two-handed operation. Most of the time we won’t turn our phones, especially if under a certain age.

The result is that horizontal video ends up playing almost postage stamp size, wasting more than two thirds of the phone display. However, portrait mode video will fill the display from top to bottom because it has the same aspect ratio at the device.

Just look at these two screenshots. They both show a dragon ornament, but one has been filmed horizontally and the other vertically.

If you are interested, the dragon’s name is “Falk”, a smoking dragon, made in Wales by Quarry Pottery

In 2017, Buffer and Animoto showed that in terms of engagement square videos outperformed horizontal video on social media, on both mobile and desktop.

and Facebook and showed that brands were crushing it with vertical video.

Furthermore, using vertical video ads turned out to be cheaper!

So where does that leave horizontal video?

Until a couple of years ago, I would have counted myself as a vertical video hater. However, if I allow common sense and consider the research, the argument for using vertical video for mobile is increasingly compelling.

Some subjects are naturally vertical and suit portrait mode video. Obviously, most people will fall into this category, along with features such as the Eiffel Tower in Paris, France. Look at the two images below that show how this tourist feature might look on your phone. Which one do you find more interesting and engaging?

I’m convinced you will prefer the one where you can see more detail of this French icon.

Why it makes sense to use vertical content on mobiles

We will continue to hold smartphones vertically and presumably continue to consume mobile content the same. Vertical is today’s reality. Work with it instead of kicking against it.

Vertical is the default way to hold a phone and so people will consume video content that way. If you only produce horizontal video your horizontal video will be less engaging than a vertical video that plays full screen. Digging your heels in and refusing to accept that is how people watch content on mobiles risks being left behind and letting your competitors overtake you.

Creating a vertical video for consumption on a smartphone is like using a zoom lens. Because you are able to use more of the display real estate you can show more without resorting to extreme close-ups.

Portrait mode video is an opportunity to exercise your creativity and develop a new way of being a storyteller. Why wouldn’t you want to do that?

Since we know most videos are watched on mobile portrait mode should be the ideal format for vloggers. Since your face will fill more of the screen you can engage more effectively with the viewer. It is a real bonus for personality-driven video content.

9:16 Vertical Video format makes a lot of sense if you produce online courses. You can appear in a vertical video on the left of the screen and place lesson notes or other multimedia assets on the right.

Why Horizontal Video will remain mainstream

Let’s be honest, the 9:16 Vertical Video format is unlikely to replace the way we watch TV or feature films at the movies. Its strength is in delivery to mobile. Widescreen is the way we naturally interact with our environment and it will continue in non-mobile arenas.

The horizontal video provides a cinematic experience that gives the filmmaker more scope to reveal elements in the scene or story. It is in our psyche to talk about looking around corners. We don’t think about looking up above or down below us, generally, that doesn’t reveal anything.

Longer content seems more satisfying in widescreen because it is less intense. The subject in a horizontal video isn’t in-your-face to the same extent as in a vertical video. Although the close-up effect of the vertical format is a strength, you can have too much of a good thing. In this case, horizontal vs vertical video has a clear winner with horizontal.

. Think about the look of the shot if turn on the rule of thirds

guide, and you place yourself on the vertical third lines. In the horizontal version, you have moved considerably from left to right. In portrait mode, there is much less difference between the two shots because the frame is tall and narrow.

Anyone can produce at least one clever idea for a video. But the good news is you don’t need to be hyper-creative to keep producing video ideas. What you do need is a method.

To find out how to generate idea after idea you should read my article on how to produce clever ideas for videos. Click on this link

This article isn’t about the details of making vertical videos, but you will probably want to know about vertical video size, or resolution, etc.

Like landscape video, the vertical video size is not fixed. You can render your video in a variety of resolutions while keeping the aspect ratio the same.

We could, therefore, more accurately refer to the format as 9:16 vertical video.

IGTV allows videos between 15sec and 60min, although the longer uploads must be uploaded from a computer. Vertical video on Instagram that is up to 10min long must be less than 650MB. Longer videos can be up to 3.6GB in size.

On YouTube, you can upload videos that are a maximum of 12 hours long or 128GB.

The vertical video Instagram size is less generous than that on YouTube. However, would anyone really want to watch a vertical video for longer than 60min?