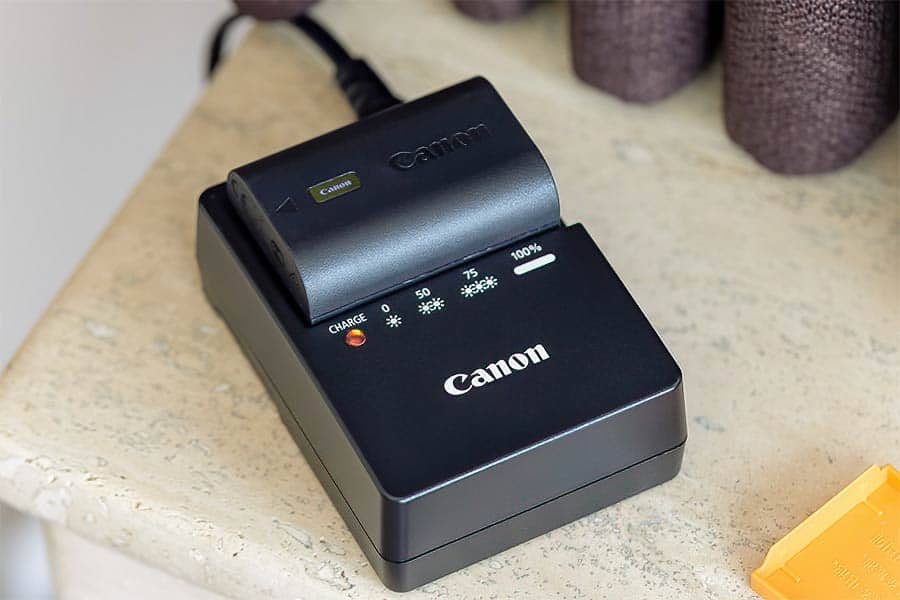 Rechargeable Lithium-ion or Li-ion batteries are a popular choice in consumer and professional cameras. This is because, compared to other rechargeable batteries, they do not exhibit a memory effect, have low self-discharge, and provide high energy densities.

What this means in the real world is:

On commercial shoots, I frequently only need a couple of batteries when shooting full HD video. However, the power drain is higher when shooting 4K video.

I am a Canon shooter and since genuine Canon camera batteries are not cheap, I have done a lot of research about how to get the best performance and service life from a camera battery.

The first thing I needed to know was if I charge a Li-Ion camera battery overnight, is it safe or will the battery overcharge?

A Lithium-ion battery cannot be overcharged because the charger includes overcharge protection. Charging will automatically stop when the battery reaches 100% capacity. But if the battery is left charging, this can cause damage that will reduce the performance and service life of the battery.

How To Charge a Camera Battery

How you charge a camera battery might depend on whether the camera is a consumer-level camera or a camera aimed at photography enthusiasts and professionals.

Batteries for consumer-level cameras are often charged in the camera, although this is not always the case. However, DSLR and Mirrorless camera batteries are usually charged in an external battery charger. These are normally supplied with the camera. If your camera was not supplied with a battery charger or you have lost it, compatible battery chargers are available from third parties. They frequently use a USB power supply instead of a wall outlet transformer.

This makes the replacement charger lighter, cheaper, and portable, since you can use USB adapters, computers, and power banks as potential power sources.

Like consumer-level cameras, many DSLR and Mirrorless cameras allow charging of the battery inside the camera. This is done by using a USB-C cable to connect the camera to a USB power adapter, power bank, or computer USB port. Once connected, you can turn on the camera and let it charge.

If your camera was not supplied with a USB charging cable, third-party cables can be purchased separately. You can find them online or at most electronics stores. Note that in some cases, in-camera charging will only work if you are using the correct type of cable and a genuine battery from the camera manufacturer. This is the case with Canon R series cameras, you can read my article about charging the EOS R here.

Can You Leave a Battery in The Camera All the Time?

Lithium-Ion batteries, even when stored outside of a camera, will gradually lose some of their charge. However, when the battery is left in the camera, the battery will discharge at a much faster rate. This can lead to excessive discharge, causing the batteries to become exhausted over a prolonged period. The outcome is damage to the battery and a reduction in battery life.

Can You Keep Camera Batteries in the Charger or Charge them Overnight?

If everything stayed the same there would not be a problem, but the Li-Ion battery will begin to self-discharge.

At room temperature (21°C or 70°F) the rate of self-discharge is relatively low but if the camera battery is much warmer, as it would be at the end of charging, the self-discharge rate will be higher.

In the case of a Canon LP-E6NH battery, and other types will be similar, when the battery’s charge falls to 94% the battery charger will kick in and recharge the battery to full capacity. Although this ensures you have a fully charged battery for your photo or video shoot, keeping the battery at or close to 100% capacity can reduce battery performance and battery life. This is because when we keep the battery fully charged, the high voltage will stress the battery.

How Long Will a Camera Battery Last?

There is no definitive answer to this question since the lifetime of the battery will depend on the ambient conditions in which it is kept and how you use the battery.

As mentioned above, leaving the battery in a charger for longer than necessary will tend to degrade the battery. Keeping the camera battery at high temperatures will also accelerate self-discharge and have a detrimental effect. Letting the battery discharge until it is exhausted is another way of abusing the battery.

The expected lifetime of a Lithium-Ion battery and the time it can power your camera will be shortened by fully charging to 100% and exhausting the battery to 0% capacity.

If you need to store a camera battery charge it to between 40 and 60% of its capacity and store it outside of the camera and at around 15°C (60°F).

When using the battery, you can help maximize its useful life and performance by charging to less than 100% of capacity and swapping it for a fresh battery before it is exhausted. Also, avoid using the battery where the ambient temperature is very low or high. A temperature of about 21°C (70°F) is ideal.

However, doing everything you can to maximize the useful life of a Li-Ion battery does not correspond to the real-world experience of a professional photographer or videographer. The main objective is to grab all the required shots and usually do it on a tight schedule.

What I can tell you about my experience as a professional videographer is that the two Canon LP-E6N batteries I got with my EOS R mirrorless camera in November 2018 are now failing and require replacement. That’s four years of use. However, that does not consider COVID, illness, and a downturn in commercial video work. Realistically, I would have expected a couple of years of intensive use. But if I were an amateur photographer, four years of battery use seems reasonable.

Is It OK To Use Third-Party Camera Batteries?

As I mentioned earlier, a genuine Canon LP-E6NH battery can cost $120. If you are a professional hybrid photographer that’s just another business expense. But if photography is your hobby, $120 is a sizeable chunk of money. Considering third-party batteries can cost as little as $20, it’s not surprising they are tempting.

Some people will tell you never to use third-party camera batteries. However, no reputable battery maker will sell a poor-quality product that is likely to burst into flames or explode.

What I can say is that when I have tested various brands of third-party Li-Ion camera batteries, they have NOT performed as well as the camera manufacturers’ brand of batteries. Even where the third-party battery has claimed a higher capacity than the genuine Canon battery, the battery life has failed to impress.

Are Lithium-Ion Batteries a fire risk?

Lithium is a reactive metal, and it can burn and even explode. But modern lithium batteries are mostly safe to use, provided they have been properly manufactured.

If you find that the battery seems unusually hot while charging, turn off the power immediately. Failure to do so may result in fire.

Also, be wary of any damage that might have been caused due to dropping a battery. If you can see obvious damage to the battery, you can be pretty sure you should not try using it again. However, internal damage may not be as obvious or visible, so be wary.

If you see any bulging of the battery after charging or use, that is a sure sign that the battery should be considered faulty.

To remain safe, regularly inspect your camera batteries and ensure the electrical contacts cannot be shorted.

As you can see in the image at the start of this section, fire damage to a camera does not look pretty and can be expensive in terms of lost property and lost lives. In London, England, the London Fire Brigade

attends an average of 24 fires each week that have been started by chargers, batteries, and cables.

How I Use My Camera Batteries

Whether my professional shooting involves shooting a few hours of video or a lot of stills, I ensure I have at least three charged batteries in my kit bag.

I am more concerned about the length of time I can shoot using one battery than trying to squeeze as much longevity out of the battery. Therefore, I will charge my batteries the day before the shoot, so they are 100% charged.

When out on the shoot, I will swap over batteries when the on-screen battery meter shows that the battery power is getting low. If I have time, I can go into the camera menu on my Canon EOS mirrorless camera and check the Battery Info. Which will give a better indication of the remaining power. I try to switch batteries before the red low battery warning appears on the screen.

If you use Adobe Premiere Pro to edit videos you might come across this situation. You’re importing video clips into a project. All the clips were recorded in the same session, all of them have the...