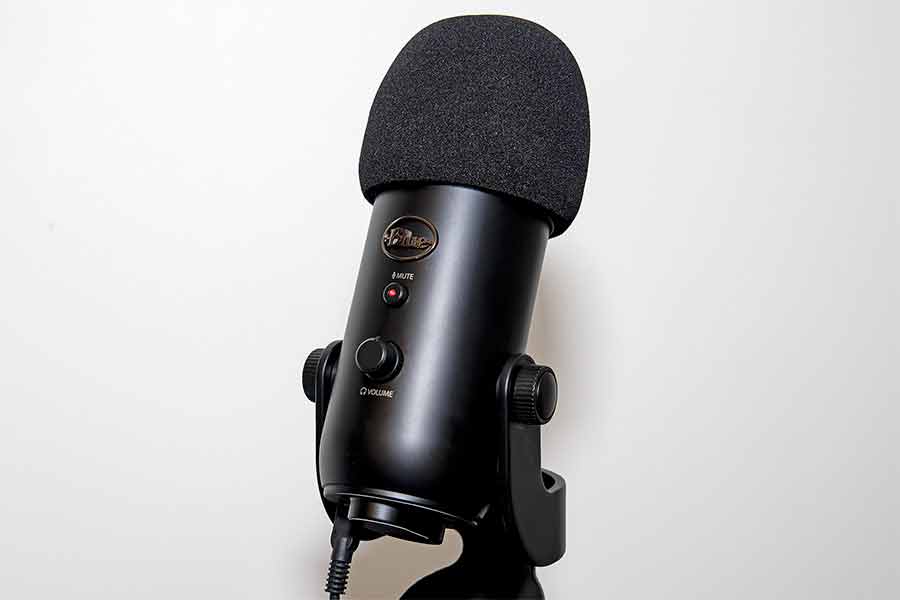 When I went shopping for my Blue Yeti, because I knew it had been originally launched in 2009, I asked, “does the Blue Yeti does work with Windows 10”. Yes, it does, I was assured. Happy with that answer, I went ahead and bought this nice-looking USB microphone.

When I got the mic home because an installation disk wasn’t included in the box, I looked on the Blue Microphones

website to see if I could find any installation files and a Blue Yeti drivers download. However, I needn’t have bothered.

You do not need Blue Yeti drivers for Windows 10 since the Yeti is a Plug’n’Play USB microphone. Just connect the Yeti to your PC’s USB port with the supplied cable and Windows 10 will recognize and install the Yeti as a USB audio input device.

So, instead of having to look for installation software and drivers, it turns out that setting up the Blue Yeti is very simple. Which of course is one of the advantages of using a USB microphone. You don’t need those professional XLR plugs and cables, nor do you need to get and install an audio interface. USB keeps everything simple.

Connecting a Blue Yeti to your Windows 10 PC

To connect the Yeti to your PC, you’ll need the USB cable that came with your Blue Yeti. Insert the mini-USB plug into the socket on the base of the Yeti.

Then connect the other end, the one with the USB-A plug, into one of the USB ports on your computer. If you are using a more recent computer that only has USB-C ports, you’ll obviously need a mini-USB to USB-C cable.

Once connected to your computer, since the Yeti is a Plug’n’Play device, Windows 10 will detect the microphone and install it as one of your available audio input devices. You probably will now be able to start using your Blue Yeti as your sound input in whatever app you’re going to run, such as Audacity, Adobe Audition, or Zoom.

Setting your Blue Yeti as the default audio input device

Although Windows may automatically set the Blue Yeti as your default input audio device, it may not do that if you have another device already selected, such as the microphone on a webcam. If that’s the case, here’s what to do.

To select the Blue Yeti as your microphone you need to do that in Windows Sound settings. There are two easy ways to open the Sound settings window.

(1) Type “sound settings” in the Windows search bar. Then in the results list that opens, click on Sound Settings.

(2) Right-click on the Speaker icon in the bottom right of the Windows 10 task bar. A small panel will open. Then click on “Open Sound settings”.

Whichever method you use, you should now see the Sound settings window open.

Under Sound you will first see a section titled Output. Below this there is another section called Input. This is where you can choose your input device.

If you already have another microphone installed, perhaps if you have a webcam, it might be set as your default audio input device.

To change to the Yeti, click on the box beneath “Choose your input device”. Then select the Blue Yeti from the drop-down list of available audio input devices.

Once you’ve selected the Yeti as your input device, its entry in the list will turn blue, and you’re done. The Blue Yeti will now be your selected default audio input device.

The solution to your Blue Yeti not showing up Windows 10 may end up with you having to dive into Windows Sound System settings and Device Manager but there are a few things to try first.

If your blue yeti is not showing up as a device in Windows, before you do anything else, make sure it is plugged into your computer’s USB port.

In my experience, even if the Yeti has previously been installed, it must be connected to the PC in order to be visible in Device Manager or Sound Settings.

[i] Check the USB cable

If the status light does not come on when the mic is connected, check the USB cable. Is each USB connector fully inserted? Try unplugging and plugging in again. If the Yeti’s status light still doesn’t light up, try another USB port on your computers or try using a USB cable that you know works.

[2] Check the Yeti on another computer

Still no luck? Try using the Blue Yeti on another computer.

If the Yeti’s status light comes on and everything appears fine, then the USB socket on your original computer may be faulty.

But if the status light doesn’t come on and you have tried a couple of USB cables, then the Yeti may be faulty.

[3] Reinstall your Blue Yeti as an audio device

If the Yeti’s red status light is lit but you’re still getting the “Blue Yeti not recognized Windows 10” error you can try uninstalling and then reinstalling the Yeti.

You’ll need to go into your computer’s Device Manager and delete the Blue Yeti as an audio device and then connect the microphone again, so Windows reinstalls it. To do this, follow these steps.

Step 1: Ensure the Blue Yeti is connected to a USB port on your computer. You should see the red LED on the mic’s mute button lit up.

Step 2: Right-click on the Windows logo icon on the left corner of the taskbar to open the pop-up menu.  You should see “Device Manager” as approximately the fifth entry from the top. Click on it to open the Device Manager.

Step 3: With the Device Manager open, expand Audio inputs and outputs. You should see Yeti Stereo Microphone listed as both a microphone and speakers. Right-click on each Blue Yeti device and choose “Uninstall”.

Step 4: With the Yeti uninstalled you can now unplug the Yeti’s USB cable from your computer.

Step 5: Reboot the computer. Once the PC has rebooted and you’ve logged back into Windows, connect the Blue Yeti microphone using the USB cable and wait for Windows to install the microphone again.

Hopefully the Yeti will now be detected, and you can go ahead and use it in the app of your choice. But if you’re still experiencing problems you can try updating the Blue Yeti’s drivers.

If the Yeti is still not being detected it may be that the drivers may have become corrupt and are stopping the microphone from functioning.

You’ll again need to open the Device Manager, so the initial steps are much the same as in uninstalling and reinstalling the Yeti as an audio device.

Step 1: Ensure the Blue Yeti is connected to a USB port on your computer. You should see the red LED on the mic’s mute button lit up.

Step 2: Right click on the Start or Windows logo icon on the left corner of the taskbar to open the pop-up menu.

You should see “Device Manager” as approximately the fifth entry from the top. Click on it to open the Device Manager.

Step 3: With the Device Manager open, expand Audio inputs and outputs. You should see Yeti Stereo Microphone listed as both a microphone and speakers. Right-click on each Blue Yeti device and choose “Update Driver”.

Step 4: Windows will ask you; how do you want to search for drivers? Choose the first option of Search automatically for updated driver software.

Device Manager will search for the required driver and update it, but it may also report that the best driver is already installed.

Step 6: If all went well, restart your computer and log into Windows. Hopefully this will have fixed the problem and you’ll no longer have the problem of “Blue Yeti not recognized Windows 10”.

[5] Avoid using a Blue Yeti with a USB hub

If you use a lot of USB devices, be aware that Blue Microphones does not recommend plugging the Yeti into a USB hub.

Normally, you should not share a USB hub with other high-data throughput devices. This could lead to problems such as the Blue Yeti producing choppy audio, clicks, or stuttering. Using a USB hub may also cause problems with the Yeti not being recognized.

This has not been a problem for me when I’ve tried using a USB. I tried using my Yeti with a USB hub but did not experience any problems. But I know of others who have. If that’s the case for you, try bypassing the USB hub and plugging the Yeti directly into one of your computer’s USB ports.