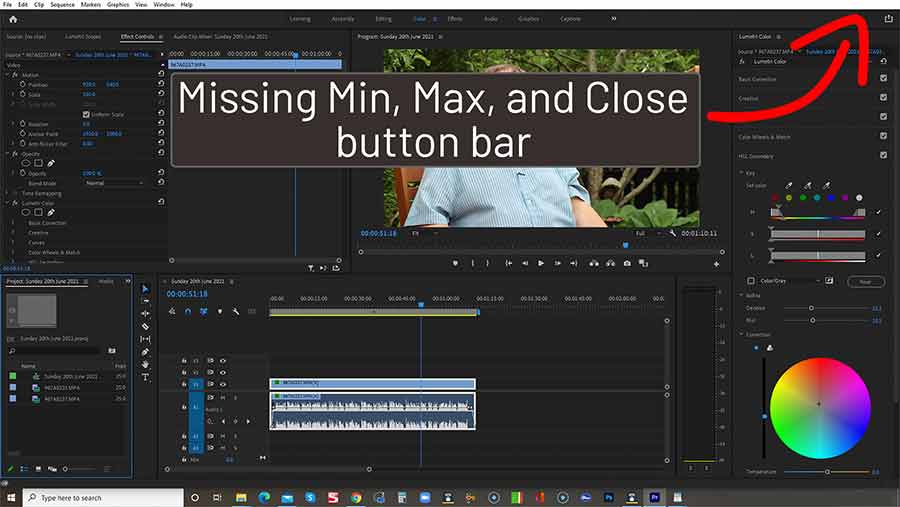 If you’re missing the Minimize, Maximize, and Close button bar in Adobe Premiere Pro CC or if Adobe After Effects minimize button has gone, don’t worry, it’s easy to recover the buttons with the stroke of a few keys.

To recover the missing Minimize, Maximize, and Close button bar in the Premiere Pro CC or After Effects user interface, use one of three keyboard short cuts. One example is to use Ctrl + \ on Windows or Cmd + \ on Mac.

But as I mentioned in the opening, this is just one of three keyboard shortcuts you can use. There’s also another method that involves deleting a folder. So, stick with me and I’ll cover all the methods of how to fix the Minimize and Maximize bar in Premiere Pro.

There are other keyboard shortcuts that will have ultimately have the same effect, however I’ve only mentioned the ones that are the easiest to use.

As already stated, you can toggle the Minimize, Maximize, and Close button bar on and off by using the keyboard shortcut Ctrl + \ on Windows or Cmd + \ on Mac.

This is by far the quickest and easiest method to use but I would point out one thing that you need to be careful of. Some users have reported that this keyboard shortcut does not work. This is probably because they have used the forward-slash key instead of the backslash key. Indeed, Ctrl + / will not toggle the button bar, so make sure you use Ctrl + \.

I have also seen someone suggest the use of Ctrl + Shift + \ as a keyboard shortcut. Although this combination of keys will work the inclusion of the Shift key is unnecessary. It’s the Ctrl + \ that is important.

This is another way of fixing the missing Minimize, Maximize, Close button problem in Adobe Premiere Pro or After Effects. It takes slightly longer than Method 1, but not by much, and it’s just as easy to do.

First, use the keyboard shortcut Alt + Space Bar. This will open a small panel with Restore, Move, Size, Minimize, Maximize and Close.

Click Maximize in the panel or press the X on your keyboard. This will restore the normal mode in the Premiere Pro or After Effects user interface.

Strictly speaking, this method does not use Premiere Pro keyboard shortcuts, but the result will be the same, you’ll get back the Minimize, Maximize, and Close button bar.

Use the Windows keyboard shortcut

of the Windows key + Up arrow. This will maximize the selected window, effectively restoring the Minimize, Maximize, and Close button bar.

Using the Windows key + Right arrow will also restore the button bar, although Premiere Pro may also be resized to fit the right-hand side of your display. To maximize the program window, click on the newly recovered Maximize button.

I would recommend you proceed with caution if you decide to use this solution.

With that warning, to recover the missing Minimize, Maximize, and Close button bar in Adobe Premiere Pro you can delete the version folder. A new version folder will be created the next time you launch the program, effectively resetting the program’s settings.

These instructions are specifically for installations on Windows computers. I cannot say for sure whether the method can be adapted for a Mac computer.

Now that you know the version number you can look for the program’s version folder. On a Windows machine use File Explorer to navigate the following path.

Note that you should also use your username for UserName in the path above.

Now that you are in the Premiere Pro folder you will see one or more folders, depending on which versions of the program you have installed. For instance, if you are using Premiere Pro CC 2021 installed (that’s version 15.0) you will see a folder with the name 15.0.

When the new version folder is created, the settings will be put to the default values. Hence, the missing Minimize, Maximize, and Close button bar will be visible again in Premiere Pro.

As I mentioned, be careful with this method if you have stored any projects in the default folder. If you have, then you’ll lose your settings and project file saves if you delete the version folder. By changing the folder’s name, you can always change it back if necessary.

As you can now see, there are several ways of recovering the missing button bar. The easiest way is to use the keyboard shortcut of Ctrl + \. However, other keyboard shortcuts will also achieve the same result. Another effective method is to reset the program’s settings by either deleting the Premiere Pro version folder or renaming it.