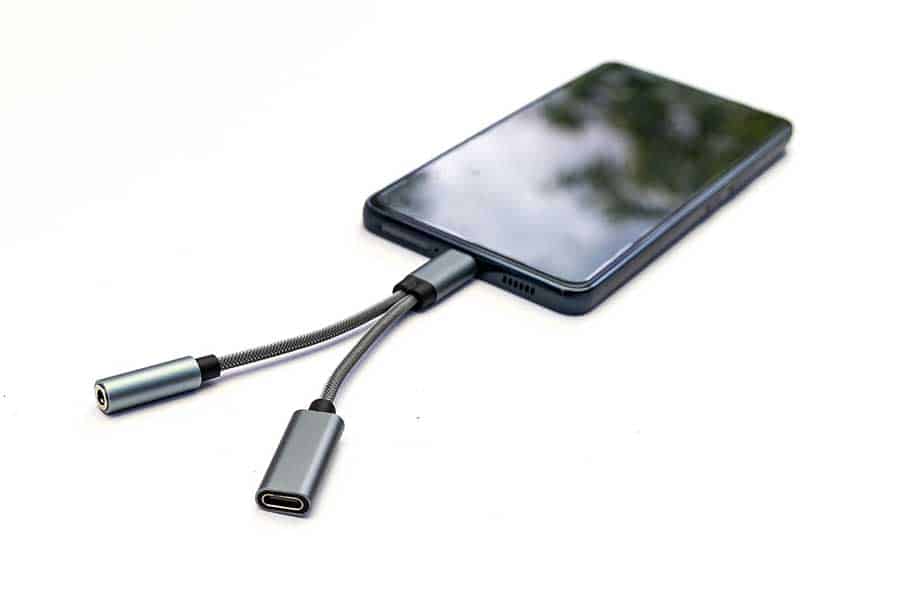 When you use your Android device to jump onto a conference call, shoot a video, or record a podcast, the internal microphone will inevitably be further away from your mouth than is ideal. Remember, it’s a phone and normally on a phone call, the built-in mic will be close to your mouth. But if you start using your smartphone as a camera device, you’ll have to move it to frame yourself correctly, so the built-in microphone will be further away. Although you’ll look good, your sound will suffer.

To improve your sound quality, you can connect a lapel microphone, so the mic is back where it needs to be, close to your mouth. But lapel mics often have 3.5mm jacks, and as we all know, modern smartphones often do not have a 3.5mm headphone jack.

How to connect a lapel mic to an android phone today

Unfortunately, there are several types of jack plugs. The main type that is used in consumer-level audio products is 3.5mm in diameter and is either a TRS or TRRS type. I go into a little more detail about the type of connectors used on smartphones and lapel microphones later in the article. If you do not know the difference between a TRS and TRRS headphone jack, use this link to jump ahead to that section.

You can also jump ahead and watch a video where I test three microphones with a USB-C headphone adapter.

Connecting a lapel mic with a 3.5mm TRS jack to a phone’s headphone jack

You can see in the image below that a lapel mic with a TRS jack needs to use a TRS to TRRS adapter in order to connect to the headphone socket on the phone.

Connecting a lapel mic with a 3.5mm TRRS jack to a phone’s headphone jack

The following image shows this being done.

From the two previous situations, you can guess there are two setups when you’re using a modern Android phone that has a USB-C port.

The following image shows how to connect a lapel microphone with a TRS jack to a modern phone using a USB-C adapter plus a TRS to TRRS adapter.

The second setup is easier and only requires one adapter because the adapter and the lapel microphone both use TRRS connectors.

To connect a 3.5mm TRRS lapel microphone to an Android phone with a USB-C port, first, plug a USB-C to headphone jack adapter into the phone. Then, plug the microphone’s 3.5mm jack into the adapter. Everything is connected and the phone should recognize the lapel mic as a headset or an external microphone.

In the following image, you can see that the 3.5mm TRRS lapel mic plugs straight into the headphone socket of the USB-C adapter.

Recommended Adapter that will connect a Lapel Mic to Android Phone

NOTICE: I was NOT approached by any sellers or third parties to promote these products. Nor were the products supplied to me free of charge. I bought all the gear myself for independent testing.

After quite a bit of research, I found several adapters that should allow me to connect a lapel mic to my Samsung Galaxy A53-5G Android phone’s USB-C port. Since there were several potential adapters, I bought a few to test. Although they all seemed to work, I chose the Xumee and Lamscat as my number 1 and 2 choices, respectively. What made me confident about picking the Xumee USB-C to Headphone adapter was that many actual users have left positive feedback online about the item. 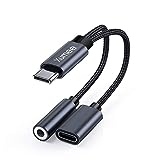 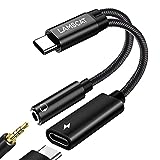 I tested the adapters with a Samsung A53-5G Android phone, connecting several lapel/lavaliere microphones, along with an on-camera mini super-cardioid shotgun mic. Each microphone either has a 3.5mm TRS or 3.5mm TRRS jack plug.

None of the microphones are prohibitively expensive. Most were around $20-$40, one was even under $10, although the mini super-cardioid shotgun mic came in at a little over $100. I also included a legacy microphone, the Vivanco EM216 I bought over 20 years ago. It’s still working, despite regular use, and I have seen the microphone still being sold on eBay.

The microphones tested were as follows:

In the case of the lapel microphones, the adapter worked perfectly, although the microphones with a TRS jack required an additional TRS to TRRS adapter between the mic and the headphone socket of the USB-C adapter. Like smartphones with headphone sockets, these adapters are designed to accept 3.5mm TRRS jacks.

In the microphone tests, the Xumee and Lamscat worked as expected and I didn’t have any issues with the lapel mics. The recorded audio was clear, and the adapters did not produce any noticeable self-noise. To my ear, the results seemed the same whether I was using the Xumee or Lamscat adapter. They both worked perfectly.

The sellers say the built-in premium DAC audio decoder chip provides high-resolution HiFi sound quality, with noise reduction. When recording, the audio certainly did sound as I’d expect from the microphones I used.

The unit also has a PD 60W fast charge chip, so you can charge the phone from a power adapter or power bank while recording or listening. The fact that I was able to power my phone from a Power Delivery device while recording was extremely useful, allowing me to work for however long I needed, without worrying about how long the phone battery would last.

Where I did have a problem was when using the Deity V-Mic D3 on-camera mic. Out of four recordings with the Deity, only one was good. The others had background hiss or clicking. Since I have two of these microphones, I tried swapping them over in case the mic had developed a fault, but it was the same story with the second mic. I also tried changing the recording app but that didn’t make any difference.

So, my experience is that if you want to use a 3.5mm lapel microphone with a Samsung Android phone, the Xumee USB-C to Headphone Jack adapter works well. But connecting the Deity mic is an issue. I’ve not seen this problem on my Canon mirrorless cameras, and I’m a little disappointed since I think the Deity V-Mic D3 is the best of the three mics I tested.

You can watch the following video, where I test the Xumee adapter with the Audio-Technica ATR3350 and MOVO LV1 lapel microphones plus the Deity V-Mic D3. I have not processed the audio, other than normalizing the three test recordings to peak at -6dB.

Connector options between a lapel mic and Android phone

The connectors on your Android phone

Let’s consider your Android mobile. If it’s a modern or high-end phone, it may just have a single USB-C port. If it’s a little older, the connector might be a micro-USB port. Moving further back, you might also have a 3.5mm headphone/mic jack connector.

As smartphones have lost their headphone sockets and adopted a single USB-C port, microphone manufacturers have been releasing their lapel microphones with USB-C connectors.

This is because of a new European Union rule

that takes force in 2024. All new devices sold in the EU that are rechargeable via a cable must have a USB Type-C port. This includes mobile phones, tablets, digital cameras, headphones, and headsets. Manufacturers worldwide are likely to adopt it, since doing so will reduce manufacturing costs. This will affect both Android and iOS devices.

The connectors on your lapel microphone cable

Lapel microphones usually have a 3.5mm jack connector, although newer ones for smartphones have USB-C connectors.

The 3.5mm jacks on lapel mics can either be TRS or TRRS, depending on the type of recorder being used. Those with TRS jacks work with DSLR cameras, digital audio recorders, and various other domestic audio devices. But lapel mics with TRRS are intended for smartphones and tablets.

The latest lapel mics for smartphones tend to have USB-C connectors since that’s the type of port for wired charging that all new smartphones will need to have. However, since many content creators use DSLR and Mirrorless cameras, which includes me, some lapel mics and on-camera mics will continue to have 3.5mm jacks.

Connecting a lavaliere microphone to any smartphone or mobile device is set to become a whole lot easier, thanks to the European Union. The EU’s new rules, governing the charging ports on mobile devices, will lead to USB-C ports becoming standard on all makes of smartphones worldwide. This will cause most wired lapel mics for smartphones to be shipped with USB-C connectors. In the meantime, inexpensive adapters are available for older Android phones.

Can you plug a lapel mic into a phone?

Can I plug any lapel mic into an Android phone?

Why is my microphone not working on my Android phone?

Software or hardware could be causing the problem. A fix that often works is to turn the phone off and on again. This will close any apps that may be causing the issue. Leave the phone off for up to 30sec before restarting. Once restarted, test the mic by using the Voice Recorder or the Video Camera.

Why doesn't my mic work on my phone?