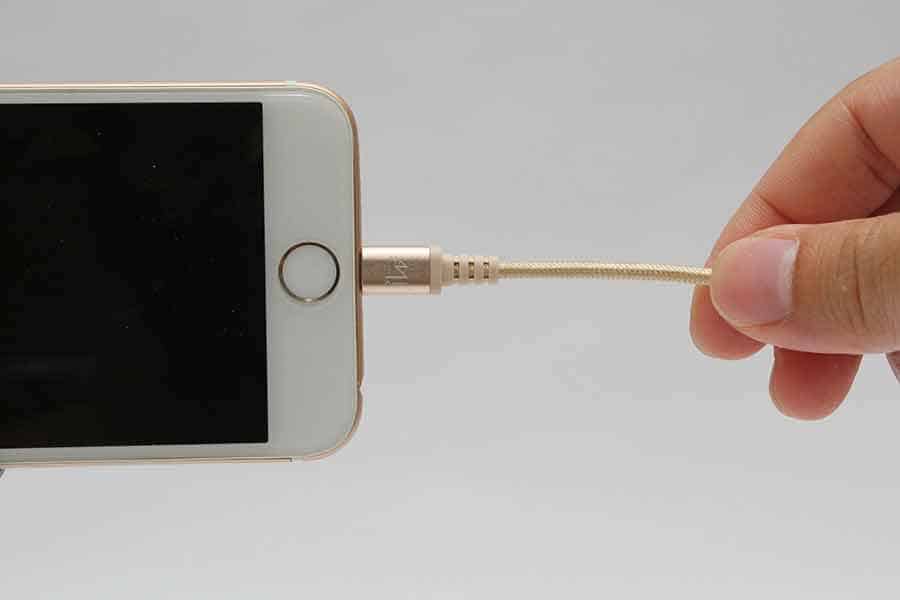 Some people report that their iPhone external microphone is not working, and I can sympathize. I had the same problem when I started using my iPhone for video recording. So, I did some research and soon found the solution.

Connecting an external microphone for iPhone video recording can be a problem if your mic does not have a TRRS or lightning connector. Usually, all you need is the correct adapter. That’s probably going to be a 3.5mm TRS to TRRS adapter or an Apple Lightning to 3.5 mm Headphone Jack Adapter. However, by daisy-chaining three adapters, you can even get a professional XLR microphone to work with your iPhone.

In the rest of this article, I’ll explain how to identify the connector on your microphone, what adapters you’ll need, and finally, how to connect an external microphone to an iPhone.

Depending on your iPhone you will have one or two options for connecting an external mic to your iPhone.

Until the iPhone 7 came along, the iPhone’s headphone socket had a dual function. It could pass audio both into and out of your iPhone. So, you could listen to calls or your favorite music on your earbuds. You could also use the built-in microphone on your earbuds to make calls or record audio. Of course, you could also plug in an external microphone to record quality audio.

However, a word of warning. If you use an iPhone with a headphone socket, you can’t plug in just any 3.5mm mic. There is an issue with 3.5mm jacks and iPhones you need to be aware of.

The headphone socket on an iPhone only takes 3.5mm TRRS jacks. So the first problem is that some microphones come with a TRS jack and not the TRRS jack that iPhones support. So, plugging a TRS jack into a TRRS socket won’t work. The electrical connections just don’t match up. Fortunately, it’s becoming less common for microphones intended for use with iPhone to have 3.5mm TRS jacks.

To tell these two jacks apart count the metal conducting parts on the jack (the parts between the thin black or white rings). The number of parts equals the number of letters in the name. So, TRS jacks have three metal parts but TRRS jacks have four metal parts.

In the following image of a TRS and TRRS jack, you can see that the TRS jack has a Ground connector and then a Tip for the left-hand part of a stereo signal and a Ring for the right-hand part of the signal. That’s fine if the connector is being used to send audio one way, either for a microphone or for headphones.

However, an iPhone is designed to allow you to use your earbuds to hear an incoming caller, and for them to hear you from the built-in mic on the volume control of the earbuds. With a TRS connector, there’s no way audio can travel in both directions. However, by making the Ground connector smaller a Microphone connector can be added, creating the TRRS connector.

There are two standards for the TRRS jack, although I’ll not go into that here. If looking for a TRS to TRRS, other than the one I recommend, just make sure that it is listed as compatible with iPhones.

Whether you have a microphone with a 3.5mm TRS or TRRS jack, a lightning connector, or even a professional XLR connector, you should be able to connect it to any iPhone. What you’ll need is one or more adapters and possibly an extension cable.

Here are the various types of connectors you’ll most likely need, and a link to such a connector on Amazon.

Now don’t panic. In most cases, you’ll only need one of these connectors. And there are some situations where you won’t need any adapters at all. For instance, I have included the extension cables should you need to get the mic further from your iPhone.

Say you have an iPhone 6S Plus or iPhone SE, then you can plug microphones with a 3.5mm TRRS jack straight into the headphone socket. Meanwhile, if you have a microphone with a digital lightning connector, well that can plug into the lightning socket on any iPhone from the iPhone 5 onwards. So can you use an external mic with an iPhone 7 or later? Yes, you can if you use the Apple headphone adapter.

With the iPhone 7, Apple removed the headphone socket, leaving just the lightning socket. Clearly, round 3.5mm jacks won’t fit into the rectangular lightning socket. Well, yes they can, provided you use an adapter.

Apple used to ship the iPhone 7 and 8 with a 3.5mm headphone to lightning adapter, but they’ve now stopped doing that

. The adapter is now a paid-for accessory. It allows you to connect headphones or an external mic to the iPhone’s lightning socket. But there is one condition, the headphones or microphone must have a TRRS jack.

If you bought your iPhone before Apple stopped including the adapter, check the box your phone came in. But if you cannot find it or you never got the headphone adapter, I recommend buying one from the Apple website

or an Apple Store. At $9 the Lightning to 3.5 mm Headphone Jack Adapter is relatively cheap and being a genuine Apple accessory you know it will work with your iPhone.

In the past, I tried saving myself a few pennies by buying cheap Chinese adapters. Unfortunately, many didn’t work. In the end, I bought the real Apple accessory from their website.

To see which adapter you’ll need, if any, check out the following table. Choose the row in the table where the first column has your microphone’s type of jack/connector. Then look in the second column for the type of iPhone socket you want to connect to. The third column shows the adapter or sequence of adapters you’ll need. Finally, the fourth column contains the adapters I recommend from my own experience. For more details click on the links to their listings on Amazon.

Examples of how to connect an external microphone to an iPhone

You can use pretty much any microphone with your iPhone, provided you have the correct adapter or adapters. You can even use a professional XLR microphone, although if it’s a condenser mic it will either need to be self-powered or you’ll also need to provide phantom power.

You can always daisy-chain your adapters if you cannot find one that takes you directly from your microphone’s connector to the iPhone socket you want to use. The only worry with this approach is the possibility of loose or faulty connections, or perhaps some kind of interference.

If you are plugging an XLR microphone into the iPhone’s lightning socket, you will need one or two adapters. If using the Sennheiser KA 600i cable, plug the 3.5mm TRRS jack into a Lightning to 3.5 mm Headphone Jack Adapter, and then plug the adapter into the iPhone’s lightning socket. However, if you bought the MOBOREST XLR to 3.5mm TRS jack microphone cable you will also need to include a TRS to TRRS adapter between the mic cable and the Lightning to 3.5 mm Headphone Jack Adapter.

Is Your iPhone External Microphone Not Working?

I have read comments in a number of online forums suggesting their iPhone external microphone is not working. They commonly seem to have this problem with the iPhone 8, X, and 11.

One person suggested the problem was related to the order in which the cables were connected. For instance, they suggested plugging in your Mic to the Lightening Adapter first and then inserting the Lightning adapter into the iPhone. I have tried changing the order in which I make the connections and it makes no difference. For me, it just works.

I suspect the problem is the headphone adapter that is being used.

I have previously bought some cheap and some not-so-cheap TRRS to Lightning adapters from Amazon and eBay. I could use them to listen to recordings on my headphones, but I couldn’t use them to record onto my iPhone.

When I bought the Apple Lightning to 3.5 mm Headphone Jack Adapter from the Apple website it only costs $9. It must be one of the cheapest Apple accessories. But here’s the thing, Apple designed it to comply with the Apple specs, so the iPhone recognizes it correctly. As a result, it functions as a bi-directional adapter. That’s why I recommended it earlier on in this article.

So, to summarize. If your iPhone external microphone is not working, it’s probably your headphone to Lightning adapter that’s to blame. If you buy a Lightning to 3.5 mm Headphone Jack Adapter from an Apple store or their website, you shouldn’t have any problems with connecting an external mic to your iPhone.

Can you connect an external mic to iPhone?

How do I connect my USB microphone to my iPhone?

How do I record external audio on my iPhone?

How do I record external audio on my iPhone?

You can feed audio from an external microphone into the Lightning socket of your iPhone by using the Apple headphone adapter. Your audio input can then be recorded in an app, such as Voice Record Pro or Filmic Pro, by choosing the headset mic in the app’s settings.

The Blue Yeti USB microphone is very popular with people who are starting out in online streaming and content creation. Not only is it a fully featured USB microphone that captures good quality...

Even though the Blue Yeti USB microphone was launched in 2009, it is still an incredibly popular microphone, and rightly so.