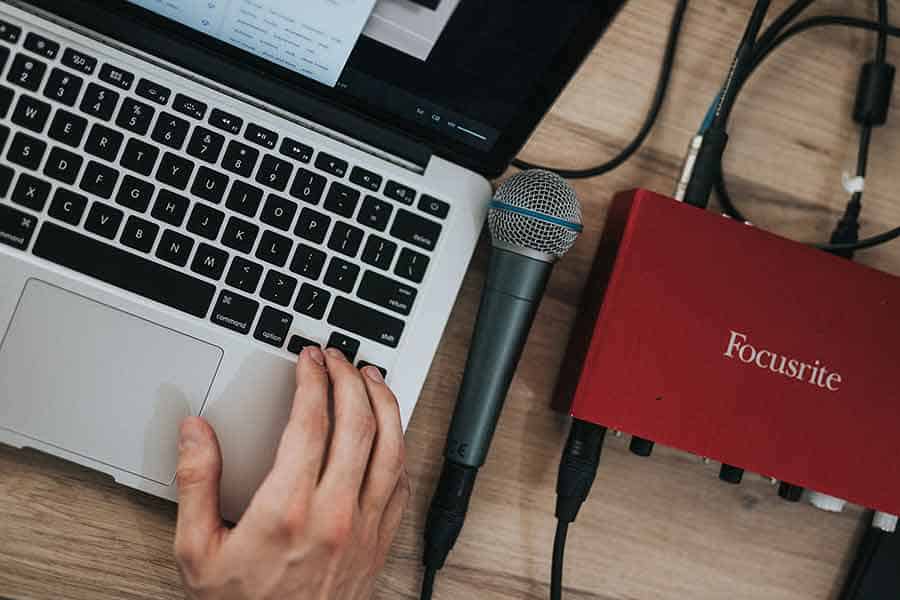 DIY Video Studio is supported by its readers through ads and affiliate links. As an Amazon Associate, I earn from qualifying purchases. If you use any of the links, thank you.

Do you need an audio interface with a USB mic?

In the rest of this article, I describe the differences between USB, XLR microphones, and audio interfaces, and explain when to choose an audio interface vs a USB mic.

What is an Audio Interface?

An audio interface is like a mini audio mixer in a box, usually with twist knob gain or volume controls. It allows professional audio equipment to connect to a computer.

The interface converts the audio signal into digital audio a computer can work with. The interface takes over the function of the computer’s internal sound card, partly because the interface produces better quality digital audio. Indeed, one of the main reasons for using an audio interface is to maintain the highest audio quality.

Since it is effectively an external sound card, an audio interface also converts digital audio from the computer into analog audio for output to studio monitors (speakers) and/or headphones.

Professional recording studios and more advanced home studio setups use audio interfaces because of the versatility they offer, in terms of the type and number of devices that can be connected. Although the cheapest audio interfaces may only accept one microphone, more expensive models will allow the simultaneous input of multiple mics and instruments.

Advantages of using an audio interface:

Disadvantages of using an audio interface:

What is a USB Microphone?

A USB microphone is a mic that produces a digital output that a computer can understand, thereby removing the need for an external audio interface.

Some USB mics also have a ¼ inch (3.5mm) headphone jack. This allows the user to listen to the mic’s output. Some microphones can behave as external sound cards, allowing to user to hear a mix of the mic output and the audio from the computer.

What is an XLR Microphone

An XLR microphone is an analog mic with an XLR connector at its base, through which it connects to audio equipment, like preamps, an audio interface, amplifier, or audio mixing desk.

If you look at the base of the mic it will have three metal pins that connect to a female XLR connector on the end of a mic cable.

These microphones are usually professional quality and can be of several types, including Condenser, Dynamic, and Ribbon.

The audio cable used with an XLR microphone is usually of quite a thick diameter since it contains wires, a metal screen, and insulators. The design prevents interference and noise, so the cable run can be quite long without noticeable noise.

The end of the cable that plugs into an audio interface or sound mixer might be an XLR connector or ¼ inch jack.

What is a USB and XLR Combo Microphone?

These microphones provide flexible connectivity and future-proofing by having both USB and XLR connectors. So they can be used with a computer either by being plugged into a USB port or by connecting to an Audio Interface, which itself is connected to the computer’s USB (or Firewire) port.

Because they offer both types of audio connections, they tend to be available on high-end USB mics, which are more expensive than standard USB mics.

Getting this type of USB mic is a good way of future-proofing yourself if at a later time you upgrade your home studio to include an Audio Interface. You won’t necessarily need to also upgrade your microphone.

Alternatively, you might want this type of mic if you have a home studio with an Audio Interface but also need to record at a venue onto a laptop.

A third possibility is that you want to simultaneously record from both USB and XLR outputs. So you can record to your computer and a digital recorder (like a Zoom H4n) at the same time.

Examples of such combo USB/XLR mics include the Blue Yeti Pro and Shure MV7. 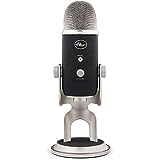 Is a USB microphone as good as using an audio interface?

However, even the higher-priced USB microphones, do not usually perform as well as the combination of a good quality microphone and a good audio interface.

For example, Shure MV7 USB microphone looks as if it is modeled on the Shure SM7b professional XLR microphone. The USB mic costs about $140 less than the pro mic, even though it contains the extra electronics for the analog to digital converter, headphone output, and an XLR socket (should you want to plug it into an audio interface). So, although the SMV7, one of the best USB mics around, sounds good, it’s no surprise that the SM7b still sounds better.

The reality is that professional recording studios and broadcasters will spend more on pro microphones because they need audio that is pristine. However, content creators and Zoom users, who tend to buy USB mics, have smaller budgets and their audio is delivered over the internet to computer speakers that are often mediocre at best. Therefore, making USB mics as good as and as expensive as very good professional mics doesn’t make sense.

Can You Use a USB Mic with an Audio Interface?

A USB mic cannot be used with an audio interface. A USB mic produces digital audio, a sequence of ones and zeros. However, an audio interface mixer is designed to work with analog audio inputs from microphones with XLR or ¼ inch jacks.

Does a USB Microphone have a Built-in Audio Interface?

Both USB microphones and Audio Interfaces have analog to digital converters as part of their electronics. These are used to convert the analog audio signal to a digital audio signal. So in a sense, yes, USB mics have a built-in audio interface. However, the analog to digital converter in a typical Audio Interface is of better quality than that used in a typical USB microphone.

Why should I use an Audio Interface instead of USB mic?

An audio interface is designed to take analog audio from a microphone, or instrument, and convert it into digital audio. The audio interface uses a high-quality built-in analog-to-digital converter to ensure the digital audio mirrors the original analog audio signal as accurately as possible before the digital signal is passed to the computer via a USB or Firewire cable.

Do I Need an XLR Cable for a USB Microphone?

You do not need an XLR microphone cable for a USB microphone. XLR cables are for microphones with XLR connectors that connect to audio interfaces or mixers. USB mics use a USB cable to connect to a computer’s USB port. The USB socket on the microphone is usually a USB-B, mini-USB, micro-USB, or USB-C.