The Blue Yeti is a legendary mic. It was one of the first credible USB mics for good quality YouTube audio at an affordable price. It has become so popular that even non-creators have it for video calls. However, being popular with creators and viewers doesn’t make it the best microphone for your money if you don’t need all its features or understand how to use the Blue Yeti.

Keep reading for reviews of my top 3 picks. But later in this article, you can read why I think you might want to consider an alternative to the Blue Yeti.

Best 3 alternatives to the Blue Yeti

The Fifine K678 USB Microphone looks like the Yeti’s younger sibling, but with almost the same sound and features as the Yeti. It’s a Cardioid microphone, instead of being a multi-pattern mic like the Yeti, so it costs much less.

The Audio Technica AT2020 USB+ sounds good, providing sensitivity and clarity whether recording speech, vocals, or instruments. However, that sensitivity might be a problem for you if you’re location has a lot of background noise.

The Shure MV7 USB/XLR microphone has a rich and darker sound, reminiscent of radio presenter mics. Being a dynamic mic it’s good at rejecting background noise. You also get the choice of USB or XLR outputs, but it does cost a little more. 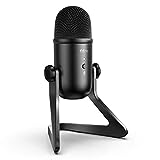 The Fifine K678 looks a little like a small version of the Blue Yeti. It’s a condenser mic that’s looks, sounds, and has similar features to the Yeti. Where it differs is in only having a cardioid polar pattern. But that’s fine if you’re recording speech or streaming since that’s the polar pattern you’d want anyway.

It’s supplied with a desktop stand, but I would recommend mounting it on a boom or scissor arm to help minimize the sound of any bumps and keyboard noise. Adding a good pop filter will also benefit this mic, especially if you like to get close in.

On the base of the microphone body, you’ll find a 3.5mm headphone socket to monitor the audio, and a mini-USB socket to connect the microphone to a computer. Between the sockets, there’s a threaded mounting hole to take the supplied adapter that allows the mic to be screwed onto a boom or scissor arm.

The microphone has controls for mic gain, headphone volume, and mute. There’s also an indicator LED to show that the mic is powered/muted.

The audio resolution maxes out at 16-bit/48kHz and the frequency response is 40Hz–20kHz. In tests, the Fifine sounds like the Blue Yeti, but since it is smaller and requires fewer components than the Yeti, it’s much cheaper.

This condenser USB mic is great for speech, vocals, and music. It has lovely clarity and good sensitivity.

It’s an all-metal design that feels like a pro mic in your hand. But the thumbwheel dial controls for headphone volume and monitor mix are a bit of a negative for me. They’re like something I’d expect on a 20th-century transistor radio. I would prefer twist knobs with a pointer mark and a scale on the mic body.

The mic sounds pretty good, with a full frequency response. Consequently, vocals, speech, acoustic and electric instruments sound good. However, the cardioid polar pattern isn’t super-tight, that coupled with the mic being a sensitive condenser mic, which might mean it can be a little lively when it comes to background noise like keyboards.

Unfortunately, there’s no gain control on the mic body, so you’ll have to control the gain on your computer. The maximum bit depth and sample rate are also a little disappointing, even so, I admit the mic does sound good.

The MV7 sounds good, with a darker tone compared to the Yeti. The MV7 has an agreeable warmth of tone and a quality that can be adjusted in the free ShurePlus Motiv software. You can have the sound flat or add a high pass filter, presence boost filters, plus a limiter and compressor.

One of the stand-out features of the MV7 is its dual outputs.

On the base of the mic, you’ll find both XLR and micro-USB sockets. But you don’t just have the choice of one or the other, you can use both outputs together.

You can send the unaltered audio from the dynamic capsule to an audio interface or digital recorder via the XLR out, while the MV7 sends digital audio to your computer via USB.

The dual output is a kind of futureproofing. If later, you decide to move to an audio interface recording system or need to plug it into a sound mixing desk you can carry on using your Shure MV7 microphone.

To get the best from this mic I’d recommend getting close since it uses a dynamic capsule. However, the foam windjammer that ships with the MV7 could do with an upgrade. Use the much better foam windjammer from an SM7b or get a Stedman Proscreen Pop Filter available on Amazon.

Although the MV7 isn’t the cheapest of USB mics because it is a dynamic mic the sensitivity falls off rapidly with distance from the mic. That might suit you if you have a background noise issue.

First, let me say I like the classic Blue Yeti and the more recently upgraded and even better Blue Yeti X. But I also have issues with these USB microphones. Let me explain why you may be better off getting a different microphone.

This mic is pitched at new content creators who understand they need to level up their audio quality. Unfortunately, the Yeti’s design makes it easy to make a good mic sound bad. Consequently, almost as many folks hate the Yeti as those who love it.

Let me summarize how the Yeti is misused.

The Yeti comes with a heavy desktop stand so naturally, you put it on your desk. Mistake 1.

But because it’s a big lump of metal you can’t see your computer monitor or reach your keyboard, so you move the Yeti to the side and about 4ft away. Mistake 2.

Then you notice that the can Yeti can tilt in the desktop stand, so you adjust it until the top of the grill points toward you. That’s got to be right? Mistake 3.

Finally, you remember you bought the Yeti because the advertising blurb said something about the Yeti having four polar patterns, which must mean the Yeti is 4x as good as mics with only one polar pattern. But you’re a gamer or streamer and not an audio engineer, so you don’t adjust the polar pattern according to how you will be using the mic. Mistake 4.

If you start recording with that setup, you’ll believe you’ve been given bad advice about the Yeti. It’s going to sound bad, so it must be a bad mic.

Now I’m not trying to ridicule anyone because if you don’t know about microphones then you’re just like everyone else who started with improving their audio.

All you need is a little help to get things sounding the best they can. You can read my article How to set up and use a Blue Yeti microphone

You probably don’t need all those extra polar patterns

If all you are going to do is record yourself speaking, then the Yeti has more features than you need. Trust me.

The Yeti offers four different polar patterns, each one suited to a certain type of use. You are unlikely to need more than one or maybe two of those patterns.

Most successful creators stick to one niche and develop their expertise in that niche. For example, a YouTuber who reviews camera lenses is unlikely to need the polar pattern that’s appropriate for recording interviews or singing or group conference calls.

The result is you’ve paid for features you’ll never use.

A better approach is to decide what you need and get that. If it’s versatility, then a Blue Yeti is fine. But if you only need a USB mic with a cardioid polar pattern then maybe you could spend the same amount of money getting a better mic with features you will use.

If you’re unsure of how to use the different polar patterns or mic modes, here’s a summary for you.

Some types of microphones are better suited to certain environments than others. That’s not because any mic is bad, it’s just because each has been designed to fulfill a specific purpose. In the case of the Blue Yeti, it was designed to answer the needs of the widest range of creators who need a sensitive, good-sounding, and affordable USB mic.

The problem for many people is that, like most condenser mics, the Yeti is “sensitive”. That means it can pick up background noise if you’re not careful or you can’t avoid background noise.

Ideally, you should be recording or streaming from an acoustically treated room, but that’s not always possible. In which can, a dynamic mic might be better than a condenser mic. The sensitivity of a dynamic microphone falls off rapidly with distance but the sensitivity of a condenser mic (like the Yeti) does not. So, if you get a Yeti, place it 4ft away and crank up the gain, you sound louder (but dreadful), but so does all the background room noise.

With a dynamic mic, it’s a different story. You need to get close, even when you turn up the gain. Sound sources that are further away either remain quiet or aren’t picked up.

One problem with dynamic mics is that their output levels are low compared to condenser mics. That’s OK with USM mics because the electronics sort that out, but with XLR mics you’ll need additional kit like a preamp and audio interface, which come at a financial cost.

Therefore, there’s always a balance that needs to be struck between cost and what you need the equipment to do.

Fortunately, there are lots of simple to-do hacks that can lift your food photography to another level. In this article, I’m going to share some of my favorite hacks and tricks that you can easily...

If you’re a food blogger, at some point you will want to try top view or flat lay food photography. But even if you have a great camera, your biggest headache will be mounting it above the food.