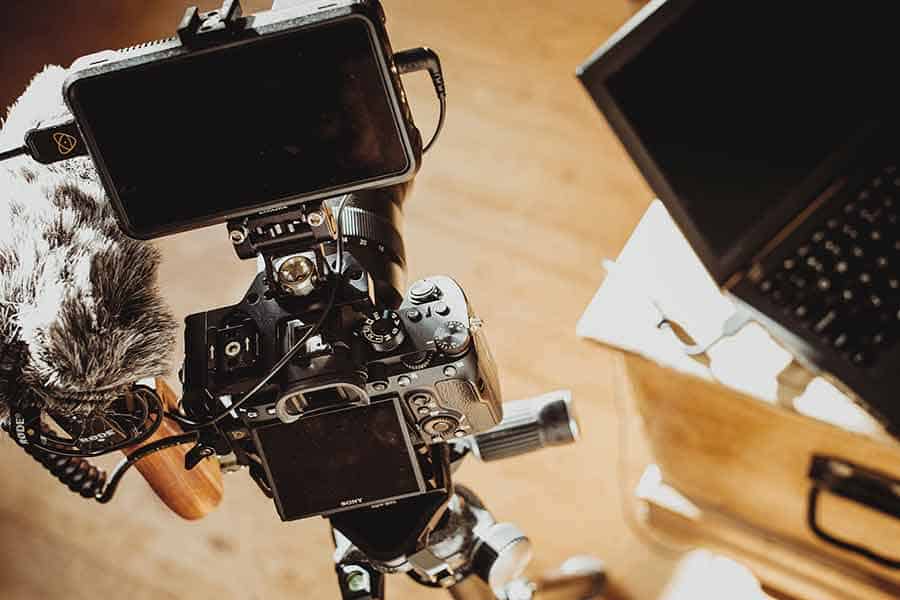 Teleprompters used to be bulky, prohibitively expensive and needed someone to operate them. No wonder teleprompters were nowhere on a YouTuber’s radar. However, in the last few years all that has changed. Manufacturers have designed teleprompters for YouTubers that are compact, affordable, and can be self-operated. So, do YouTubers use teleprompters now?

Only about 10% of YouTubers use teleprompters for their YouTube videos since scripting takes time and reduces productivity. Whereas winging it based on a list of topic bullet points can speed up production. But when YouTubers create paid-for content, like video courses, most will use a teleprompter. This ensures the content remains on topic, is accurate, and succinct.

Although not all vloggers and creators on YouTube use teleprompters, a substantial number of them do. I’ll explain why.

Why many YouTubers use a teleprompter

Obviously, most YouTubers like to create their content by speaking off the cuff. But there are times when using a teleprompter will be helpful and beneficial. Here’s when many YouTubers might use a teleprompter.

When you are a newbie

When you’re new to the game, you can feel a more than little overwhelmed and uncomfortable in front of the camera. If you add in having to think of what to say next and wing your way through to the end of the video it’s easy to understand why many creators give up after a handful of videos.

Having a script on a teleprompter is like having someone holding your hand and guiding you to the finishing line. Yes, it’s a kind of crutch, but if it helps you get the job done and helps to build your confidence, what’s the harm in it.

When you don’t want to learn a script

Have you ever had to learn some text off by heart?

I don’t find it easy and trying to recall the script when the camera is rolling is even more difficult. It’s the kind of pressure I, and many other YouTubers, really don’t need.

When you don’t want the pressure or hassle of having to remember your script or even the bullet point outline of the video. Being able to read a script of the screen is a workflow crutch that lets you get the job done.

Even when you gain experience and might be happy to wing it, there are still times when you might want to use a prompter.

Although scriptwriting takes time, using a teleprompter can speed up your production, or your time in front of the camera. You’ll have the words in front of you and in the correct order. You won’t have the concern that you’ll forget any important facts because they’ll be there in your script.

Using a teleprompter will save you time in the edit

Even when you’re done recording there are further time savings to consider. Once you’ve got your performance in the can you still need to edit, and if you’re anything like me you’ll probably have quite a bit of editing to do.

By using a teleprompter, and therefore sticking to a script, editing is going to be a whole lot easier, whether you do it yourself or hand it over to a freelancer. Instead of having to go through a rambling performance of multiple takes and trying to cut it down into a flowing and coherent video, you just need to cut sections together.

It keeps you succinct, on time and on topic

When you wrote the script, you had the opportunity to make sure everything you need to say is in the copy. Scriptwriting is an opportunity to edit your video before the camera rolls, so you can cut the fluff and waffle.

When in conversation many of us have a habit of going off at tangents and sometimes we don’t return to the original thought. Having a script helps to prevent that.

When you’re writing it’s easy to stay on topic and not depart on flights of mental fancy. If you do, just highlight the text, hit delete, and continue until you’ve finished the thought.

Writing a script to read off a teleprompter also ensures you’re not going to bore your audience. Often, I can rewrite my copy so it’s half the length. Your audience won’t thank you if you needlessly make your videos twice as long as they need to be.

I don’t know about you, but I don’t do well with remembering technical details, part numbers, and stuff like that.

With a teleprompter, a YouTuber doesn’t need to worry about getting the technical stuff right. It’s there in front of you in black and white, all you need to do is read it.

So, when you have a lot of technical details that need to be included and spoken accurately, don’t try to remember them, put them in a script and use a teleprompter.

When you’re shooting client videos or creating a video course the content will be pretty much fixed. There’s no debate about it being OK to miss some bits out or for the video to carry on for longer than necessary. The edited video absolutely has to as agreed with the client or the way it has to be to give your students the best learning experience.

In both these cases, scripting and using a teleprompter gives you complete control over the final content of the video.

Whether you’re new to making YouTube videos or an old hand, if you’ve decided to use a teleprompter you need to know how to use it.

Once you’ve written your script you need to get it into your teleprompter app.

What you don’t want to be doing is typing your script into the app. Your phone isn’t intended to be a word processor and you won’t enjoy the experience of inputting your script by hand.

Some apps, like the paid-for upgrade to Parrot 2 Teleprompter, allow you to import Word documents, text files, etc. If you have that option, go ahead and use it, otherwise follow the method I use.

Write your script on your desktop or laptop computer. Then copy the text and paste it into the body of an email you’ll send to yourself. Open the email on your phone and copy the text, then paste it into a new script document in your teleprompter app. Don’t forget to give it a title and save the script.

You can now open the script and run it in the teleprompter app. But before you start to record, I’d advise a practice to run through. That will give you the chance to check the layout of the text is as you like it or whether you need to add in a line break or close some gaps.

If your teleprompter app can be controlled remotely, you can pause the script if you feel it’s about to run off the top of the screen. Some even include the ability to increase or decrease the scroll speed. However, if you’re new to making videos and already feel it’s a steep learning curve, you might want to stick to having one button for pause/start.

Before you secure your prompting phone or tablet in place below the beam-splitter glass you’ll need to go into the teleprompter settings and mirror the text. The script will look back to the front when you look at your phone’s screen but once reflected in the mirror the wording will be flipped to the correct way.

You’ll need to attach your camera, either a phone or DSLR/Mirrorless camera behind the beam-splitter mirror. Use some blanking foam or a black hood (they should come with your teleprompter hardware) to prevent light from getting into the rear of your teleprompter. If you let in light, it’ll make reading the text a little more difficult.

The final step before recording is to ensure your delivery sound as natural as possible. The secret to this is to practice. You should try a few run-throughs and try to make sure you add some life to your presentation. To that end vary the pace, emphasize key words, and add a slight hit to the last word in each sentence to indicate the end of a phrase.

Finally, press that record button and get underway. But if necessary, record in chunks. You don’t have to record in a single take from start to finish. Once you’ve got all those chunks, or sections, recorded you can cut them together in your editor.

If you don’t like jump cuts between chunks, make sure at the start and end of each section you return to the same neutral position. That way you should be roughly in the same position in the two sections you’re putting together. To disguise the jump cut further, apply a different amount of scaling to each section.